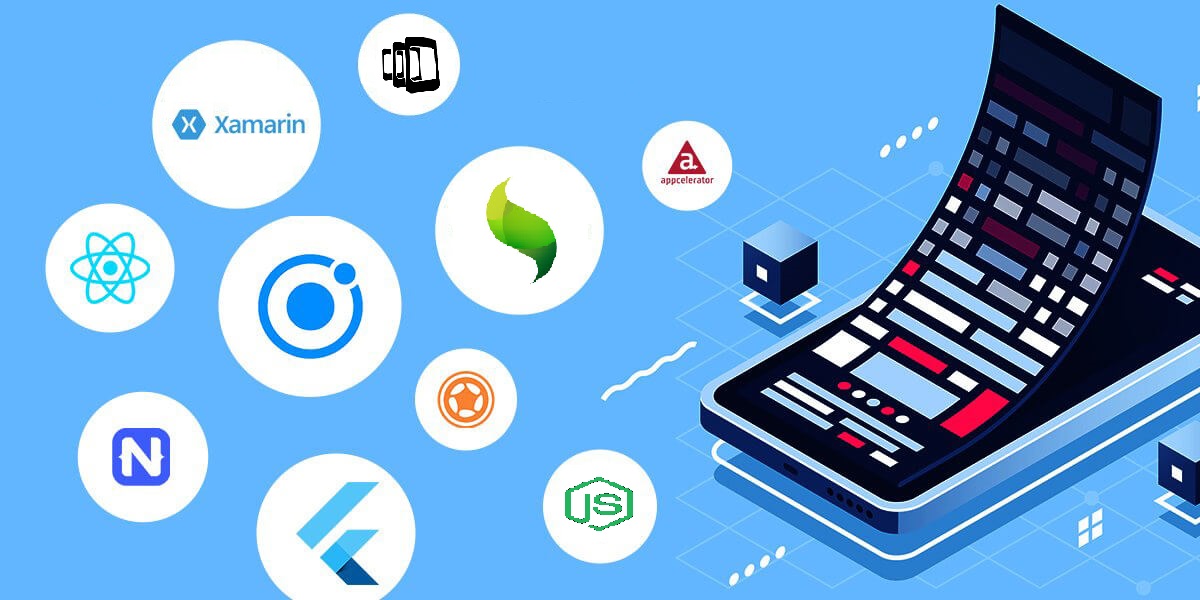 As a result, there are now a lot of these kinds of tools and frameworks, which you as a developer may find confusing. To help you find the best and most ideal cross-platform framework, here is a list of the best cross-platform app development frameworks.

Before something can be called the “best” in a field or category, it must meet specific criteria. In the same way, when deciding on the best cross-platform mobile development tools and frameworks, several important factors were taken into account so that each choice could be judged fairly.

What Are the Best Frameworks for Cross-Platform Mobile App Development?

Cross-platform software can run on different computer platforms, such as Android, iOS, Windows, Blackberry, etc. Apps built on this framework don’t need to be coded separately for each platform. Instead, they only need to be coded once, which gives them the foundation they need to run well on all platforms. It is one of the most popular ways to build apps today, and almost all of the best companies that offer mobile app development services swear by it.

What are the best frameworks for making mobile apps that work on multiple platforms?

Based on AngularJS, Ionic is one of the best and most popular cross-platform app frameworks. It lets developers access native platform controllers using various languages, such as HTML5, JavaScript, CSS, and Cordova wrapper.

Ionic lets developers make apps with creative user interfaces and features that are easy for people to use. The apps created with this framework are very interactive and feel like native apps, so Ionic is also an excellent choice for PWA development.

React Native is hard to leave out of a list of app frameworks that work on multiple platforms. It is a framework built on JavaScript used to write real code and give mobile apps that work on Android and iOS the feel of a native app. Because it has so many great features, developers and businesses choose React Native as the best platform for their apps. React Native combines the good things about JavaScript and React.JS and gives developers the option of writing modules in Objective-C, Swift, or Java.

In 2017, Google released Flutter, an impressive app framework that works on multiple platforms. It is a software development kit that makes it easier to make apps for Android and iOS. It is also the main and most important way to make Google Fuschia apps.

Flutter makes it easy to make apps that run well and consistently on multiple platforms.

Cross-platform frameworks for making apps with Xamarin are very different from the frameworks we’ve talked about so far. It is a streamlined framework for building apps for Android, Windows, and iOS with C# and.Net instead of JS libraries and HTML. It lets developers build an app using 90% of the same code for three different platforms.

With the help of its outstanding APIs, Xamarin makes apps that look and feel like native apps. This makes it harder to choose between Xamarin and React Native.

NativeScript is a free, cross-platform framework that is based on JavaScript and seems to be a perfect one. It wouldn’t be wrong to say that NativeScript is the best choice for developers who want WORA functionality.

NativeScript also has all native APIs, so developers can use existing plugins from NPM and reuse them in their projects.

Node.js is a great framework for making apps that work on multiple platforms and is a runtime framework for JavaScript that is built on the Chrome V8 JavaScript engine. It is an open-source environment that makes making scalable server-side networking apps easier. Cross-platform apps made with Node.js are fast and efficient by design. The framework can handle multiple connections at the same time. It also has an extensive library of JavaScript modules that make web apps more accessible.

Appcelerator is one of the many cross-platform app development tools that make mobile apps more accessible and smoother. It is a great way to create apps that work on multiple platforms with only one code base. Its main goal is to speed up the app development process by using JavaScript code’s native components.

Phone Gap (Cordova) is an excellent cross-platform framework for mobile development that uses CSS, JavaScript, and HTML5. It also gives developers a cloud solution that lets them share their apps as they’re being made so that other developers can provide feedback.

It makes impressive apps by using web technologies that already exist. PhoneGap is also great because it fully supports the device’s built-in features, such as GPS, camera, phonebook, storage, etc.

Sencha Touch has been around for almost a decade and helps make web-based, cross-platform apps. It is usually used to make efficient apps that use hardware acceleration techniques. Using Sencha Touch, developers can make UI components and libraries that have been tested and are safe to use. It is possible to build and manage large business apps efficiently and effectively.

With Corona SDK, programmers can make 2D mobile apps for all the major platforms, like Kindle and Windows. It makes making mobile apps and games 10 times faster. The framework gets excellent results because its backend framework is based on Lua, a lightweight programming language that can be used in more than one way. The language emphasises speed, portability, extension, scalability, and usability. It is also a free framework that works on both Mac OS X and Windows and allows for real-time testing.

What Are the Advantages of Cross-Platform Application Development Frameworks?

A cross-platform mobile development method lets you build an app and send it to different platforms, like the web. This means that by making one app, you can target both the iOS and Android platforms, which increases your reach.

Since only one application works on all platforms, it is easier to keep up with changes and send code. All platforms and devices can quickly sync updates, saving time and money. Also, if a bug is found in the common codebase, it only needs to be fixed once. App Developers can save time and money by doing things like this.

The code can be used repeatedly, another benefit of this platform. Instead of making new codes for each forum, developers can use the same one. This saves time and money because it eliminates the need to make codes more than once.

Cross-platform mobile apps work on all platforms and can use different plugins built into the cloud settings. In other words, the plugins and extensions are added to the single source code to make the application more valuable and scalable.

JumpGrowth is the most respected and trustworthy mobile app development company in the United States and India. We know how to make world-class apps and have made a number of them that have set new standards.

What is a framework that works on multiple platforms?

Cross-platform app development frameworks are the tools that developers use to make apps that run on more than one platform. Unlike native frameworks, cross-platform frameworks allow developers to write code only once and run an app on all platforms, like Android, iOS, and Windows, with only a few minor changes.

What is the best framework that works on all platforms?

Instead of just giving you one name, how about we give you the names of the top 10 cross-platform frameworks? This will give you a range of options from which you can choose the one that best fits your needs.

How do you make a mobile app work on more than one platform?

Well, it’s as easy as cutting a pie to find out. There are many different cross-platform app frameworks on the market that you can choose from. These frameworks ensure that your app works well and can run on all platforms just as well as a native app.

Also, the easiest way out of this would be to choose a great cross-platform app development company with the right experience and tech stack for making good apps.