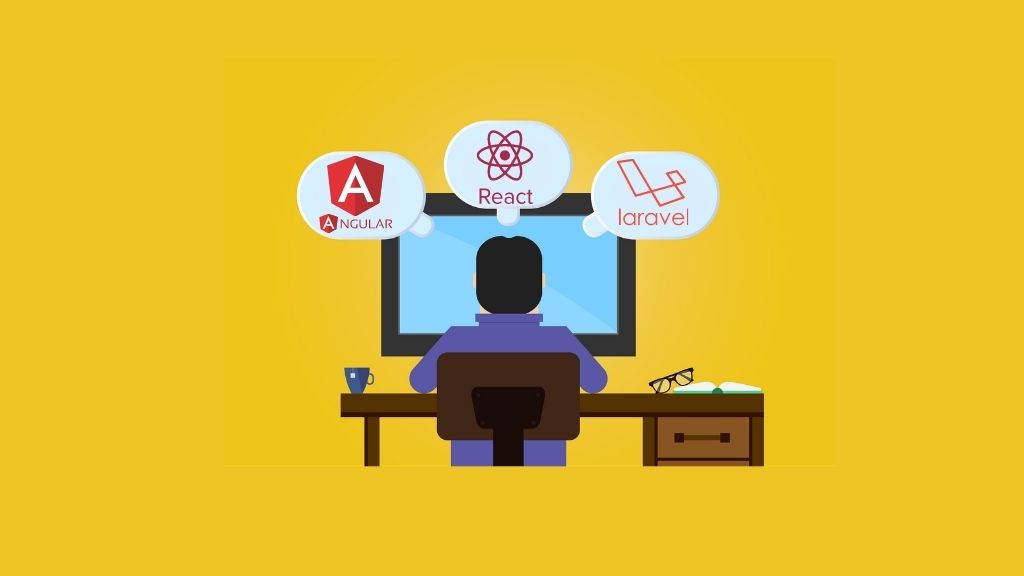 What is a web framework?

In the parlance of web applications, the frontend refers to the area of the site or application with which visitors interact directly. In the past, coders were required to manually create code to dictate these interactions and behaviors. Frontend web frameworks reduce the complexity of this task by providing pre-written coding that developers may build on.

Please continue reading for an in-depth list of the most commonly used web frameworks available today.

This one can be confusing as there are two different angular frameworks. The original angular.js framework is now in Long Term Support mode, meaning no new features or innovations are being added. The framework you want is the new Angular. This popular framework being developed by Google is rapidly innovating and provides developers with several out of the box pre-built solutions to make web application development fast.

This framework will require Node.js and utilize either JavaScript or Typescript as well as some other existing technologies like Angular CLI, which will make the generation of the modules and code packages quick and easy for the developer. What makes this framework so great is it’s tight integration with Angular Material, which is a design guideline that is modern and one you’ve probably seen on several websites. With backing from a large company and lots of community support, this is one of the top front-end frameworks for 2021 and one of the best web development frameworks out there.

A popular alternative to Angular, React.js is an open-source front end library. Because it is open-source, it has a lot more community support and plugins as opposed to Angular. It can also use either JavaScript or Typescript and has an equally popular design standard framework called Material UI. This web development framework offers all of the same benefits and tools as Angular and has very similar adoption and usage statistics.

This will still be one of the most popular web frameworks for 2021 and many years to come. This small, fast, and feature-rich JavaScript library provides so many tools that many developers now consider essential. JQuery becomes so popular that many can’t tell the difference between vanilla JavaScript and jQuery.

Essential JavaScript logic and tasks like DOM traversal, manipulation, event handling, animations, data logic and Ajax calls are all much simpler and streamlined with jQuery. It’s changed how millions write JavaScript and isn’t going anywhere any time soon. jQuery holds and will continue to hold a place in history as one of the most popular web development technologies.

Right up there in popularity with Angular and React, this will be one of the top front-end frameworks for 2021. Unlike Angular and React, Vue.js has a bit lower of a learning curve. If you know HTML, CSS, and JavaScript, Vue will be much easier to pick up. It’s much lighter weight without as many dependencies and easy to implement either in small chunks as individual libraries or as a full-featured framework.

Vue.js is a sort of hybrid between heavier and larger frameworks like Angular and React. If you have an existing application, Vue is something pretty easy to integrate right in without having to do major rewriting or code refactoring. Just like any modern front-end web framework, you’ll get all the core features you want like data binding. Unlike some of these bigger frameworks though, there might not be as robust of features built-in.

Spring comes with several great features. Data access and transaction management for your data storage needs. Web integration with Spring MVC. Testing support and other core technologies to help with dependency injection, validation, email, and much much more.

With great community support and a growing community due to its increasing popularity, this framework is one of the top backend frameworks for 2021. If you’re using or making a Java-based application today, you need to be using Spring.

CakePHP provides a streamlined and easy to use API for developers to utilize in web development. The latest iteration of this framework utilizes PHP 7.2 and comes with a host of features allowing developers to quickly and efficiently prototype applications.

CakePHP is created on MVC (Model-Controller-View) architecture which allows developers to securely and easily build with no need for complicated configurations using XML or YAML. It boasts great features like baked in security and friendly licenses to be used for commercial applications. If you use PHP, this is a great framework to rapidly prototype and build websites.

Plain vanilla JavaScript is certainly the simplest choice and growing as a development solution as the learning curve of some of the other solutions and the shear size increases. Because of this trend, Node.js is solidified as one of the best frameworks for web development and sure to stick around.

Laravel web application framework is touted as an expressive framework with an elegant syntax. It’s got a great ecosystem of different toolsets that allow you to quickly and easily build solutions utilizing PHP. The real appeal here is how much the ecosystem provides.

From cross-platform development environments to tools to allow for easy debugging, you’ll find everything you need to aid in development. Subscription billing, app scaling, zero downtime deployments, OAuth2 implementation, everything you’d think a modern website should have, is built-in natively with Laravel. This is a great option for PHP ecosystems and one that will provide lots of value.

This web application framework provides a robust middleware system for Node.js based applications. With a focus on performance, Express provides the essentials of web applications API development without becoming too complicated or obscuring features too much.

Because Express is built on Node.js, there are many popular frameworks that are built off of and utilize it. Express has a great set of documentation, tutorials, and plenty of examples you can find online. It provides all the essentials you need like routing, error handling, debugging, and database integrations. For Node.js applications, this is one of the best frameworks for web development and one of the best frameworks to build web applications.

Ruby on Rails has a great name. It implies it’s fast and easy. This is all true. GitHub, Shopify, Airbnb, Twitch, SoundCloud, Hulu. The list goes on of popular and recognizable websites that are built using Ruby on Rails. Ruby on Rails is open-source software that makes it free to use. Because of its popularity, there is a huge amount of support for it. With their statement being “Optimizing for programmer happiness” Ruby on Rails is much different from other web application frameworks.

Ruby on Rails provides a lot of great functionality for quickly building out the scaffolding of your project. From creating models, views, interfaces, database connections, and much more. Ruby on Rails does not have all the same features of a full and robust framework like Angular, React, or even Vue, so you will find yourself mixing in other things for the front end development. Ruby on Rails while fast to build can be slow in performance for larger-scale applications and isn’t as optimized for multithreading.